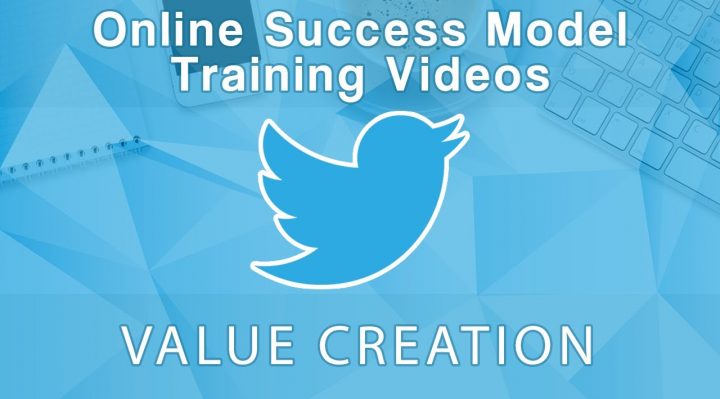 Hi, my name is Alex Copeland and I work with Richard Fairbairn and the Online Success Model Team. ‘Value Creation on Twitter’

If you’ve ever read a book called Zen and the Art of Motorcycle Maintenance, you’ll know that they tried to define quality. It’s impossible to put into words exactly what gives content value. However in the book they realize that although it can’t be defined, we all have this intuitive understand what is and what is not good quality.

As a marketer this should make a lot of sense. The thing is we usually use the word value instead of quality. You may not know exactly what every reader wants, but we all know what’s good and what bad and what’s good has value or quality.  Your tweeter is just another version of content and you need to create value in your content, but how do you do that?

Well, think about it like this; the audience needs to get something out of your tweet whether it is entertainment, humour, social or something intellectual doesn’t matter. It’s the belief that your content can in some way improve their lives. Think about the value of every tweet you post this is definitely a step in the right direction, but there is no real right or wrong way to go about value creation. It’s kind of down to you.

In online marketing of any sort we’re aiming to become an authority and to do so we give away content and in this case that’s the tweets. People pay attention to authority and if you keep the content well tuning people will see value and take notice.

Here’s an example of a tweet that has gone viral. This tweet reaffirms the beliefs of millions of people, it’s unique because it’s weighting, it stairs the two ingredients together and that’s what makes it a viral tweet.

The thing is many businesses and individuals will shy away from posting something like this because it’s controversial. But here’s the thing; maybe you should tackle the controversial, think about all the reasons why this tweet works. Don’t forget we’re marketing to humans and humans are inherently flawed so they’re going to be able to relate to stuff that maybe you don’t think they would.

Twitter is all about engagement. As a platform it allows you to send short messages very quickly. This means it’s quite for building credibility and for sending people to wherever you want like a website, blog or Facebook page. You want to keep your tweet short and sweet; it needs to intrigue the potential reader. That being said also needs to remain relevant to the post otherwise you’ll look like clickbay and this is a sure fire way to damage your reputation.

When writing content it’s a common practice to spend almost as much time on your headlines as your content. Think of Twitter as your headline. The quality of your tweet is what will get people to read the article. You can include anything that really grabs people’s attention. A quote from your content according to Twitter is 54% more likely to be retweeted and relevant hashtags will display your tweet to people looking at similar topics.

Tweeting pictures is a very effective strategy when done correctly. It’s much easier to engage them with a picture than it is with words alone. If you post a picture of your product or offer a clever bit of sharable content you can attract more attention than you ever could with just words. I cannot overstate the importance of establishing a conversation.

The best practice on a social platform is to be social, have opinions and leave insightful comments. Get involved as much as you can, these are the activities that will build your reputation and an audience.

HELP OTHER PEOPLE IN YOUR NICHE

This is often overlooked because you think that everyone as a competitor, but the Internet is massive.  Let’s think this like a pie. It’s a massive pie and all you need is a small piece of it and you’ll eat for life. Essentially, what I’m saying is that the benefits in engaging in community with a larger audience than you would otherwise be advertising too far outweigh the drawbacks of that extra competition.

A WORD OF CAUTION

Health care and having a thick skin is vital to successful digital marketing. Staying out of the wrong conversations is just as important as getting involved in the right ones. People will talk down your achievements and hey that’s life. You need to ignore all these people who have nothing to add, but negativity and scepticism. These people will often work to your advantage in the long run and draw more people into the conversation. Remember the old saying if you don’t have anything nice to say don’t say anything at all. Never has been more clickable when marketing on social media.